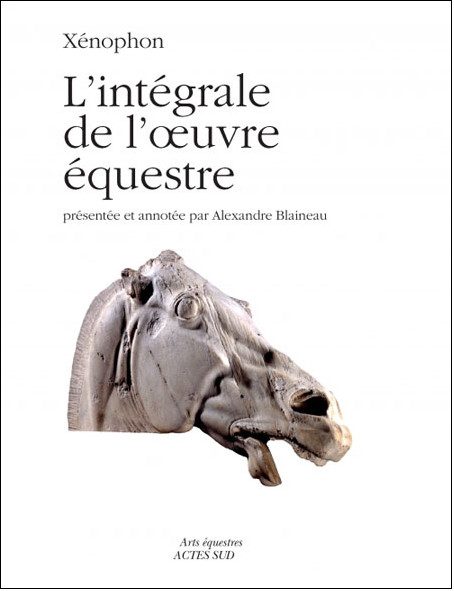 The Integral of Xenophon by Alexandre Blaineau or… the “foundation”.

…On the fingers of one hand (gentle!), one must remember his teaching (Xenophon’s) on the importance of gentleness in the relationship with the horse, a typically Greek sweetness in the sense that it reflects a certain form of being, and that could be summed up in a simple formula: “Nothing in excess.”

¿ First of all, you can give us a short description of you?

I am 43 years old and I live in Ardennes, where I am a professor of History and Geography. I defended my thesis in 2010 and continue with my research, mainly but not exclusively on the theme of horses in Greek antiquity. I am currently interested in the figure of the centaur and how it has been received to this day.

Do you ride horses?

No. I rode for a year or two, but I’m much more fond of paper horses.

If you did, ¿what kind of rider would you have liked to be?

A nomadic rider, to tour the steppes of Central Asia.

What does the horse evoke for you?

The strength to read so many texts, admire shows, watch them gallop in the prairies or during the competitions, I’m always surprised to see that the horse is still an irreducible mystery.

¿In what way does it attract you?

It attracts me precisely because of its mystery, and also because it has accompanied man for so long; He has been an important companion throughout history, at all times and in all places.

¿After reading his work, what kind of rider do you think Xenophon was?

It is difficult to say. In his treatise on horsemanship, Xenophon gives precise and general advice on the posture of the horse and on how to handle it with a “light hand”. From this we can conclude that he was a rider who used the sufficient kindness (which has led to several modern commentators to become the ancestor of ethological riding). But on this point, Xenophon should be placed within the technical context of the time: the Greek bits were characterized by being very strong on the animal (points placed in the tubules hurt the horse ‘s mouth) and one way to mitigate this pain was precisely to have a light hand.

In what way was the horse important to him?

Xenophon was part of the Athenian elite. At that time the horse could have been considered as a sign of wealth and that’s why it was such an important element. The Athenians, for example, had the ability to spend considerable sums of money to buy messengers or maintain a stable. However, we can assume that Xenophon had affection for at least one of his horses, which he wrote about at the end of a prayer in Anabasis, this long story talks about his participation in a military expedition in the Persian Empire.

With regard to the military aspect, cavalry was, in classical times, a secondary weapon in relation to infantrymen and especially the heavily armed soldiers called hoplites. However, there was the world of racing, and we know that horse racing was prestigious. Also, the large number of representations (paintings, statues, bas-reliefs, just take for instance the Parthenon frieze!) are proof of the important place occupied by these animals and how it was already considered prestigious. And the myths, which have also related to the horse: Zeus, who becomes a stallion, Pegasus, the centaurs…

Why this interest on Xenophon and his work?

Originally, it was by chance. When I was a master’s student, I worked on one of his books, The Economist, which dealt with agriculture, slave management, women’s status, but at no time was he talking about horses. When I enrolled in what was then called the DEA, I asked my teacher if I could continue working on Xenophon. He then threw me into a deeper study of the Cavalry Commander. At that time, I didn’t know anything about horses… And then it was time for the thesis: I realized that there had been no synthesis about horses and riders in Xenophon’s work. So I started (and I’m still there, 15 years after I started to get interested in the subject, and there is still so much to say). His work is interesting because it is so varied. Xenophon is in fact a polygraph writer: he is a historian, a philosopher (in fact he rubbed shoulders with Socrates), a novelist… His style is pleasant, although it can be judged (erroneously) to be too simple.

It was Jean-Louis Gouraud who, after attending to the defense of my thesis, proposed to me to make a book, which later appeared in the collection he directs in the Actes Sud editions. I had contacted him a few years before and in an almost immediate manner he became interested in my work because he tirelessly lives in constant search of anything and everything related to the horse world. I am very grateful to him for having proposed me to participate in this beautiful collection, which brings together important texts of equestrian history.

This book not only contains the translation of the two treatises of Xenophon (The Equestrian Art and The Commander of the Cavalry), but also several texts that I wrote about his important work, which refer to various aspects of the equestrian world. Hence this book was conceived as something integral.

Why were the translations of Paul-Louis Courier for Equestrian Art and the Commander of the Cavalry maintained?

Indeed, there are the translations of Édouard Delebecque that are of very high quality, and I admit that I had a hard time choosing between him and Courier. Finally, reading the biography of Courier (a controversial and unique author) made me realize the exceptional nature of this character. He is a guy who spent much of his life reading the Ancients. Someone who likes to hobnob with Herodotus or Longus. Someone so passionate about antiquity that he fought in the battle of Castelfranco (1805), bareback! Courier did an admirable research on Xenophon, and offers a very elegant translation. Of course, historical research has evolved since Courier, but precisely, I am working to fill in the gaps with many notes taken directly from my thesis.

What is it that makes Xenophon still valid?

With the reading of his treatise, one has only to be surprised by the advice that can still be used today, for example, in regards to saddling, preparation for galloping, training foals….

If we were to retain some of the principles of Xenophon’s “teachings”, say, counting them with the fingers of one hand, what would they be?

…On the fingers of one hand (gentle!), One must remember from his teaching the importance of gentleness in the relationship with the horse, a typically Greek sweetness that reflects a certain way of being, and that could be summed up in a simple formula: “Nothing in excess.” Any manifestation of unnecessary anger against your mount is, in any case, counterproductive.

What do you think of Mario Gennero’s presentation?

Mario Gennero had published the proceedings of a symposium entitled Omaggio a Senofonte a few years ago, where he united several specialists in the field. With his equestrian experience, Gennero was right to highlight Xenophon and his contributions to the history of classical riding. Above all, in his book, he kept mentioning Simon of Athens, that mysterious author who seems to have lived a few decades before Xenophon, and who had written a treaty that unfortunately we only have a few fragments left.

How does Xenophon take its place in these first months of launching The World Horse Library?

Sometimes one must dare to succumb to the vertigo of new beginnings! Xenophon’s treatise is, in fact, the first complete equestrian art book that deals with all matters related to horse riding. Therefore, I think it is a special place because it is one of the first links in a long chain of knowledge that has been transmitted to us for centuries. Since the Renaissance, equestrian art teachers refer to it, often with deference, sometimes more critically. Paul Morand, who knows what he’s talking about in regards to equestrian matters, wrote in his famous novel Milady, that the equestrian knowledge today was “the culmination of a Western work of two thousand years as a lesson of that implacable softness called equestrian touch, as the crowning of an admirable effort of Greco-Roman architecture of the which Xenophon was the first to formulate the principles”.

Without idealizing him (we must dare to criticize or at least put it back in its context of production), we must also insist on the literary qualities of the treaty of Xenophon; Here is an example of an admirable passage: “These are the horses that are represented with the gods and the heroes, and it is a great honor for those who know how to handle them. The horse is, in fact, such a beautiful thing, so gracious, so kind, that when it follows the rider’s hand, it catches everyone’s attention; it enchants the young and the old; one cannot stop watching, one never gets tired of admiring it, and through his movements he develops his grace and kindness”.

You must keep reading to Xenophon.