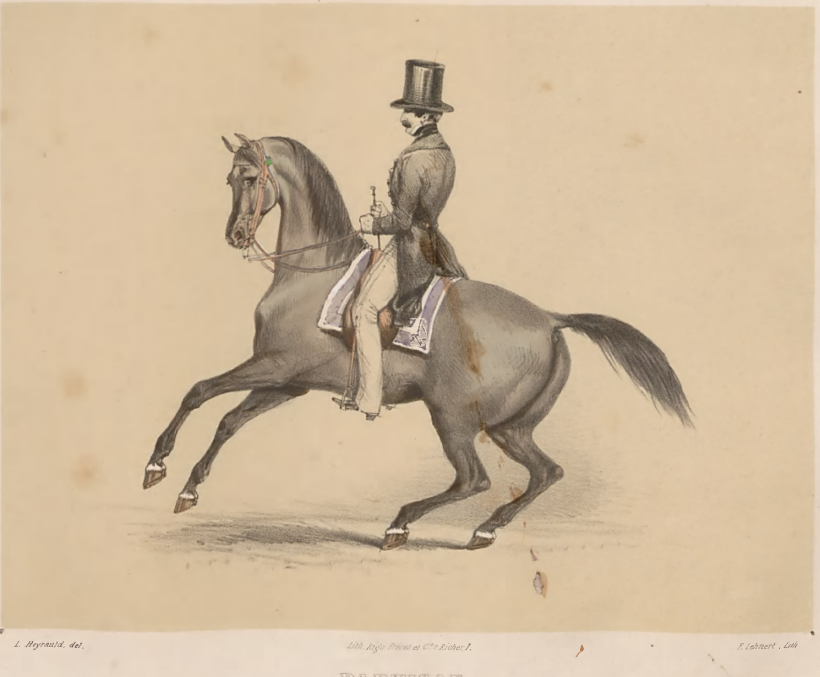 The famous squire François Baucher was not only a great rider. In addition to his well-known writings, he published author name, a magnificent album on paper, which presented the results of his work on three of his horses with the pedagogical concern of the “before and after”.

This is how Partisan appears as a vicious horse in the first illustration. Then mounted by Baucher with a coat and top hat, the beautiful animal, metamorphosed, kicking with lightness and grace switching legs in the following drawings. In the same way, Captain, a horse of ordinary ride, presents a fabulous trot in extension, a piaffe or passage, with the famous horseman in military uniform and long reins. Buridan, an ancient cabriolet draft horse, with an upside down collar, becomes a very bright horse, ridden by the author with a battle cap, high boots, frac and French style harness.

These 24 illustrations of beautiful colors were made from the natural model by Louis-Robert Heyrauld. It should be assumed that Baucher closely supervised the execution. Each lithograph is accompanied by a text page with a summary of the motives of the movement drawn. The work was launched to 1842 when Baucher worked at the Pellier stables in Paris. Did he offer a copy to General Oudinot, who appreciated him so much as to bring to commander Novital to Paris, then squadron leader in Saumur with 26 officers? Unfortunately, despite the large number of supporters of his method, he was not allowed to establish it in Saumur.

The book cannot be found today, but the digitized copy of Saumur is available.