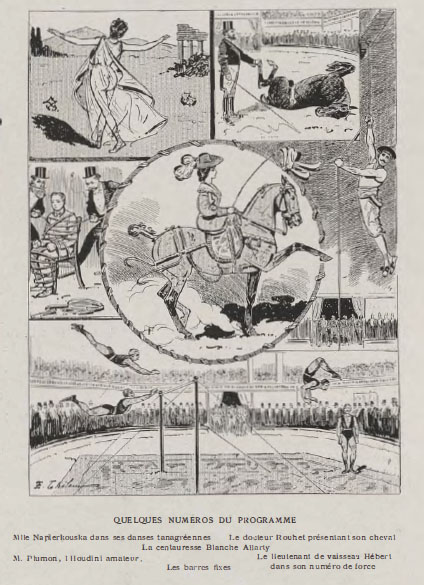 Ernest Molier (1844-1933) was supposed to become a notary in Le Mans like his father. But, more interested in the bright lights of the Parisian circus than in his studies, the young man quickly devoted himself to learning to ride with good riders such as James Fillis, Victor Franconi and Alfred Bradbury. It is said that at the age of twenty-five he was already an accomplished dressage rider.

His personal fortune allowed him to install a 13.50 meter track in a small shed in his Parisian mansion. For his own amusement and that of those close to him, he organized an open evening for his wealthy friends in which each was free to present their little act. The evening ended with a feast on the floor and dancing until dawn. Molier’s amateur circus had just been launched and lasted for almost fifty years, until the death of its owner, who described himself as a “passionate circus man.”

The elite of the judiciary, finance and the nobility came to see the show; all of Paris occupied the few seats in the stands: you had to see and be seen. Young women from good families came to take riding lessons. One of them proved to be very talented on the track: rider, acrobat, gymnast, trainer, Blanche Allarty, who came to the street of Benouville as a child, quickly became Molier’s muse and ended up marrying him.

Although the equestrian performances were the heart of the show, Molier was one of the first to present wild performances: the famous Mata Hari, represented by the one who bears the stage name Lady Mac Leod, improvised a Javanese dance while lewdly undressing, to great delight of the wealthy attendees.