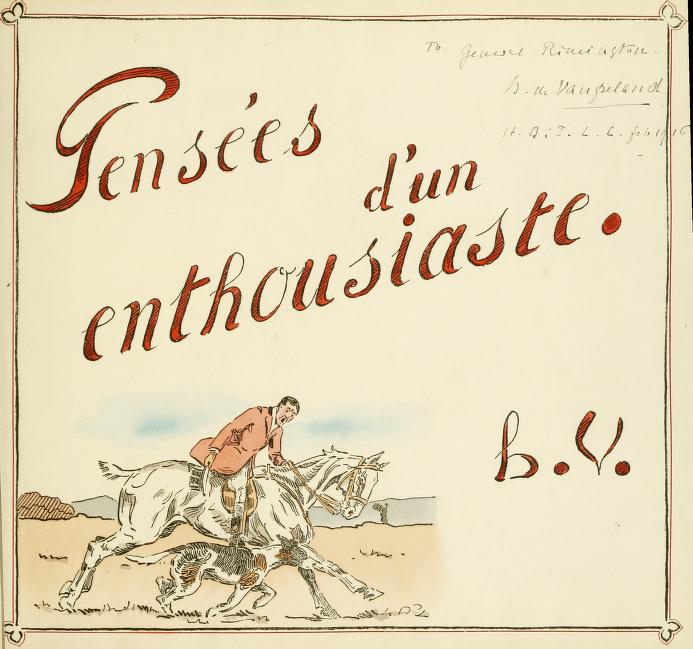 Is autumn what is approaching, like the opening of the hunt and the so-called “pack race”? Is it the gloom that is winning us much to our regret, in these times of under-confinement? In any case, digging into the nooks and crannies of The World Library of the Horse and coming up with the title Thoughts of an amateur could not be more in line with our need for optimism, which is seriously affected!

It is only a small book of drawings by Viscount Henri Fortuné Piscatory de Vaufreland, who published two others, one of which is also on Mennessier’s list of La Lance (A Cross country) and the other (Croquis de Saint-Cyr ) which is not.

The work, of which only a hundred copies were printed, which makes it rare, is of the type of those English “sketch books” signed by Snaffles, Lionnel Edwards, GJ Whyte Melville or, better still, R. Cadelcott , whose series of humorous scenes was even translated into French.

2It is certain that H.V., as Vaufreland signs his works that are said to have been published at the author’s expense, was inspired by them. The hunting with pack, especially that of the fox, its foundations, its pleasures and its adventures are, then, the pretext for a joyous display of twelve plates and sketches subtitled in color in “Thoughts of an amateur”.

At the rhythm of the current, we are conquered by the simplicity and joy of the subject and the drawing that supports it. It’s fresh. It is real. It is lived.

Viscount Henri Fortuné de Vaufreland, a native of Béarn, like many of his contemporaries, does not hide the origin of his passion. He too is seduced by this “Anglo-mania”; this way of life of the English who have “colonized” the region since a certain Wellington settled there around 1840, attracted by the softness of life in the foothills of the Pyrenees. He had a great time at the Hunt Drag de Pau, which he attended regularly, as Xavier Bougon recounts in an excellent article published in Jour de Galop.

Because in addition to racing: “The English brought their lifestyle, their sports (rugby, tennis, pigeon shooting, cricket, polo) and their leisure activities. In 1824, a handful of Scottish gentlemen founded the English Circle of Pau, an association of English notables that was originally a meeting place and reading room for British vacationers, where they exchanged the latest gossip over tea or whiskey. . On Thursday nights, we play bridge while having an Armagnac […] “.

Thus, the thoughts expressed by Henri Fortuné de Vaufreland, throughout what also resembles a comic, are full of English quotes in the text. One must remember Melton’s “Hack or Nothing” around 1840 or, as a good omen, “May you hunt for ever and ride for many a year!” from Melville, who were undoubtedly great enthusiasts as well.