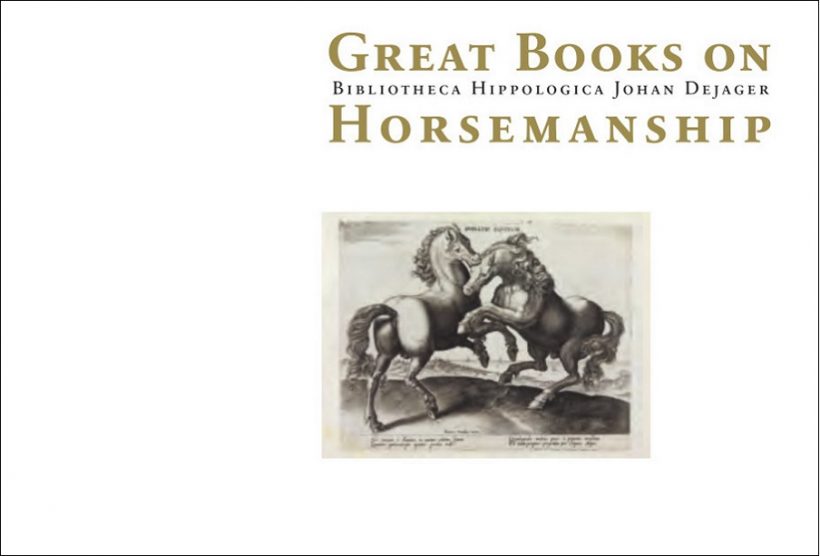 Great Books on Horsemanship: this is the title of a unique book.
This baby weighs more than five kilos (5.2 kg)! This book is a monster. An extraordinary contribution to knowledge, history and memory…

Edited in the name of Johan Dejager, it is inspired by Koninlijke Brill-Hes & De Graaf, printed in Slovenia on a 150 gram paper, it offers 784 pages (230 x 320 mm), which most of us have never read, never seen, all under a hardcover, stored in a good quality box, for 175 euros.
Limited edition, obviously. Bingo!
It’s unique, that’s what they tell you.

Monster of rarity, monster of obstinacy, of originality, in summary, monster of passion. That of a Belgian rider who discovered, late in his life, when he had the means, a rather strong taste, so as to not call it excessive, for antique books, rare books, exclusives, and obviously related to his other passion, horses; which he experienced as a jockey, owner of a competition horse stable, and organizer of high level competitions (CSI5 Antwerp and Waregem today)

Once upon a time there was a book …

If this rider had not existed, the flamenco Johan Dejager, there would be no books, especially not THIS book: Great Books on Horsemanship, compilation which although not exhaustive, is at least unique in regards to what took place on this matter during the XVI and XVII centuries. Initially, the book should have been called Great Authors on Horsemanship. “Because I wanted to take a trip back in time and present all the important authors, who wrote about horses, horse riding, veterinary science and cavalry; and this with the help of my book collection”, explains the interested party. More than three hundred and fifty in total, referenced first in chronological order and then according to geographical influences (Italy, Spain, Germany, the Netherlands, England and France), all with a focus on the description of each book through a file, very complete and as rich as possible.

Johan Dejager explains that the book was completed in three phases and over a period of seven years. ” First, use all bibliographic records (identified in each purchase of books) in a large document that includes each author ‘s biography and bibliography in my library. Then, in a second stage, I searched and found a specialist in each country to order, complete and limit what was needed: Philippe Deblaise for France, Tim Clayton for England, Valentin Moreno for Spain, Carlos Pereira for Portugal, Mario Gennero for Italy, and Claudia Condry for Germany and the Netherlands.

Later, in order to further enrich the work, we turned to written essays on different topics by Elisabetta Deriu (An Art in Motion, The development and dissemination of equestrian knowledge in Europe (XVI-XVII centuries), Thierry d’Erceville (The development of the cavalry as shown in the Works of military equerries of the 17th and 18th centuries), Bernard Clerc (The development of equine medicine in Europe viewed through the works of the equine veterinarians of the 17th and 18th centuries) and Tim Clayton (Horsemanship in Paintings, drawings and prints. The outstanding artists who marked four centuries.) I can never thank them enough for their incredible contributions.

As for the illustration, a certain Hugo Maertens, art photography specialist, took almost 2000 clichés of book pages, making 1.029 the number of illustrations finally chosen by Johan Dejager, who remained a Work Master in the literal sense of the term.

“Once this job was finished, I contacted Sebastiaan Hesselink, of the HES & Graaf house to print. Together we concluded that some editing had to be done and it took Mr. Koert Van Der Horst, former curator from the Manuscript Library of the University of Utrecht in the Netherlands, three years to verify all of the texts, line by line, to complete and standardize the whole thing, which gave us the opportunity to reach new information until now unknown. Cees de Jong could then proceed with the design.”

Therefore, Johan Dejager managed to publish the “compilation” of the century. Or rather the compilation of what that the editors of the XV and XVI of the genre, produced at the time… And there’s so much more left! In every sense of the word, these books and manuscripts are rare and expensive. Before the book there was the collector and the idea. “We were in Paris during the Antique Book Fair at the Grand Palais. Philippe Deblaise and I were having coffee and talking about how the latest books on the genre were “Anthology of equestrian literature” by Paul Morand and John Podeschi’s book on Paul Mellon’s collection. They were recently released, the first in 1960 and the second in 1981, so it’s time to do something about it … “And Johan Dejager, who is not a man to boast added “and to allow others besides me to take advantage of the work of this collector.” And he says “ the work” instead of “my work”…. Will they understand why?

For Johan, it all started more than 20 years ago. “I visited the Antiquities Fair in Paris. One exhibitor had on his stand, the huge book of Drummond de Melfort, about horses, from 1776, in splendid red leather with the coats of arms of a well-known family. Unaware of antique books, I was surprised by the beauty of the volume along with the pictures, and also by the price, it was almost 5.000 € at that time. It was too much for me. Although I wanted it, I did not buy it”

Johan Dejager ensures that the desire to collect arrived unexpectedly “after reading an article about Philippe Deblaise, the founder of the Philipica library, signed by François Monmarson in the July 2000 edition of the “Spur”. I called the editor to get the phone number for Philippe. And that’s where it all began. Philippe is, as far as I know, the only bookseller specialized in antique books on horses and riding with a historical, literary, and philosophical knowledge, and above all, a great rider himself.
I traveled there, to Gemozac, north of Bordeaux, to meet Philippe.

The relationship was good from the beginning, and still remains that way today. We talked about books for two days! We achieved a relationship based on trust, confidence and friendship. Philippe introduced me to this world. It was a true immersion. The names of the authors were intertwined and answered to each other: Amman, de Bruyn, Grisone, Pluvinel, even Winter and Zuniga.

During this visit, Philippe showed me his sixteenth-century treasures, which include Künstlicher Bericht, Corte, Rusius, Ruxner, and Meister Albrecht among others. I finally gave in and bought about thirty books, which are the basis of my collection.
Johan is shy to talk about figures but he admitted that with the check he signed that day he could have bought a small sports car.

When asked if he likes to negotiate, the businessman did not back down: “Yes. That said, I always try to figure out the ideal price that I would like to pay for a book and, with this price in mind, I begin the negotiation with the seller.” Are you patient? “No! In fact, many of my friends were surprised to learn that I spend more and more time as a collector than as an editor or author.”

Are you an impulsive buyer? Reasoned? “Both, but a phone call with Philippe serves as a guide to advance or not in a purchase.”

Your best deal? ” Some good books that I have been able to buy in small stores, for example a few years ago I bought a beautiful copy of Antonio Tempesta, Serie dei Cavalli di Diversi Paesi, which was the only book on horses they had in a store in Drouot, Paris. Also Kurtzer Extract von Zaumung der Pferdt, which I bought for little money as an anonymous manuscript but, according to Koert Van der Horst, the editor of the book, the signature is attributed to Winter von Adlerspfluegel, one of the great German authors 17th century”.

Good achievements, but also some failures. For example, this first edition of Marcus Fugger, Von der Gestuterey of 1578 or the book, almost impossible to trace from Dorohostasjki: Hipica of 1603.

Which one are you most proud of? A rare pearl on the library shelves? “Certainly the manuscript of Giovan Battista Pignatelli, Bellissimi secreti da cavalli di Pignatello. Deffinitione che vuol dir arte ueterali o uero marescalchena of 1598. Philippe had dug it up from a collector’s shop in France. After 5 years of polite negotiations, the owner agreed to give it up to us”.

Over the years, Johan Dejager has met other booksellers, such as Sebastiaan Hesselink “an eminence of the ” beau livre”” but, without having to look much further, he’d rather leave it to chance within his own “reach”, that is, within the framework of his collection.
He did not dwell on this topic too much before adding: “To begin with, I focused immediately on the sixteenth and seventeenth centuries because I like books from the early years of printing. Second, only on the “beau livre”: Works that have something special, are well illustrated, and well connected. After 1700, I only look for books with beautiful prints or beautiful series of illustrations.

Your favorites? Which do you open with most excitement? “There are two, Stradanus by Johannes Equile (1648) and Serie dei Cavalli di Diversi Paesi, by Antonio Tepesta (1590)”. Why? “Because of the beauty of baroque horses.”

He has about 350 books on his bookshelves, and yet Johan voluntarily admits that he still has a lot to read, although he knows them all for having leafed through them in detail. This brings us to the inevitable question that surrounds any book collector: Are you a bibliophile or bibliomaniac?
“Hard to say. Without a doubt both, but probably, perhaps a little more of a bibliophile. I keep reading a lot about the subject. I buy reference books. I receive and consult many bookseller catalogs and every week I follow about twenty auctions worldwide”.

This allows us to ask: what do you think about the state of the market of the antique books on horse and riding? “Personally, I think that “beau livres” are getting scarcer and that prices are going up quite quickly. There are many books that I have been able to buy and that I have never seen reappear in the market later.”

A good reason for this unparalleled collector to decide to adopt, like all the main collectors, for “ex-libris”, under the heading Bibliotheca Hippologica, this drawing of an old bit taken from a plate that gladly printed a page of the Hans Kreutsberger’s book: Warhafftige und eygentliche Contrafactur.