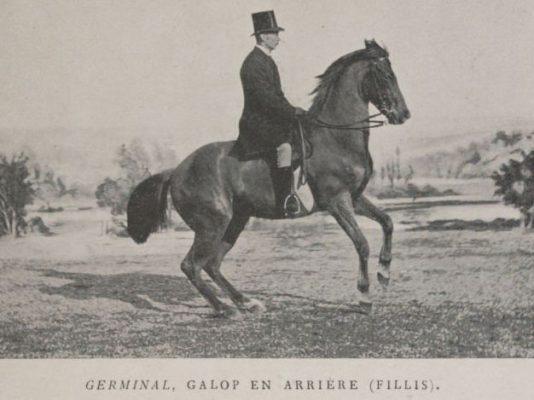 At the end of the 19th century, photographer Delton had immortalized James Fillis in Germinal’s saddle with this unique march. The English rider had arrived in France very young. He performed in the Champs-Elysees circus under Franconi’s direction before being appointed chief squire of the Saint Petersburg Cavalry Officers Enforcement School in 1898.

At that time, he was not the only one who carried out this learned air. Baucher had defined it in one of the last editions of his method. In his Journal de dressage (1903), Fillis came to criticize his companions: he challenged the captain of Saint-Phalle, who tried to ensure the changes of foot in the back gallop, dissected the photo of Jean-Baptiste Dumas and dismounted his form of doing so and awarded himself laurels for executing the movement with his horse Germinal. Saint-Phalle responded harshly in the second edition of his Dressage et emploi du cheval de selle (1904), a challenge he won despite his already failing health.

Mennessier would also have problems with Fillis. The photos of Delton that illustrate his books made him say, “No wonder what difficulties he encountered in examining photographs of his horses.”

The back gallop is still a figure that few horses and riders know how to execute. The last was Bartabas, with Don Quixote, who has made this fantasy fashionable again in the arena of his equestrian theater in Aubervilliers.