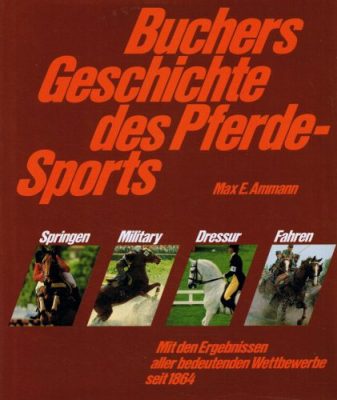 The confinement linked to Covid 19 will have stopped the exercise of equestrian sports, whatever the disciplines developed and controlled by the IEF (International Equestrian Federation) for several months.

An opportunity to get closer to what they were, to go back in time to the origin, that is, from the Dublin International Competition of 1864 and to see how and with whom, riders and horses, and how they were carried out. In short, immerse yourself in its history and this thanks to the timeless work of Max. E. Ammann’s timeless book: Geschichte des Pferde-Sports, that is, the “History of Equestrian Sports”.

The book is written in German, since its author is from German Switzerland. It was initially published in 1976, after the Montreal Olympics, by the publisher C. J. Bucher, and was completed in 1981.

This book is a treasure, and being able to read it in Goethe’s language is certainly an advantage, but just flipping through it is a delight, as it is richly illustrated and the captions are so straightforward.

Max. Early journalist E. Ammann contributed greatly to the development of equestrian sports by creating, in 1976, the Show Jumping World Cup, sponsored for a long time by Volvo, then the Dressage (Nashua) and finally that of Driving. For many years he also directed the Année Hippique, which he relaunched in 1978 with his Dutch colleague and friend Joep Bartels, then associated with Henk Brûger at BCM (Best Communication Management).

Subsequently, Ammann published for the IEF, Equestrian Sport at the Olympic Games 1912-2008 and, in the same vein, The IEF Championships: the history of world, continental and Regional IEF Championships.

In his books, and in particular in Geschiste des Pferdesports, Ammann carries out an enormous amount of research and collection of archives, especially photographic ones, which makes them exceptional.

When asked why Max. E. Ammann did not want to update his book since the 1981 update, the author replied that Bucher had no intention of doing so: “At that time I was dealing directly with Mrs. Bucher, the director’s wife. When he left us, my new contacts did not have the same interest in the subject. “

In a word: “regrettable”.