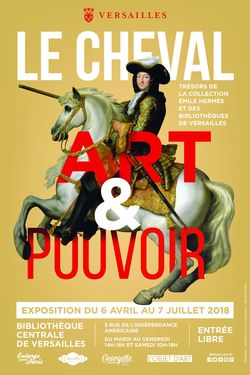 Vincent Haegele is the director of the libraries of Versailles. In this context, this year (April 6 – July 7) at the headquarters of the Central Library, two steps from the castle, he organized a beautiful premiere dedicated to the horse: the exhibition titled The horse Art and Power with the sponsorship of the Émile Hermès Collection. A long-standing project, promoted by the predecessors of the curator of the libraries of Versailles, graduate archivist-paleographer at l’École des Chartes. Vincent Haegele, specialized in the First Empire, is also the author of several reference works on the subject: Napoleon et les siens (Perrin) and more recently, from the same publisher, a biography of Murat subtitled La solitude du cavalier …

Vincent, how do you evaluate the collection of horses in the Library of Versailles, both in terms of its interior in comparison to the ones you know?

V.H. It is a collection that is not unique because it is not grouped into one and the same entity. This was the main interest of working on the exhibition project together with the Hermès House, as this helped us to better decipher the richness of our collections on the subject of “Horse” and the amount of resources.

How would you rate it?

V.H. I would call it “incomplete royalty” in the sense that many of the volumes come from the libraries of the king or princes, but some references are missing, which fortunately they have been counteracted by the contributions of collections that have entered subsequently. For example, one of the two Pluvinel that we present, or Newcastle, could be included thanks to a donation made in the 1960s by Jean and Henriette Lebaudy.

When was the last exhibition on the subject of the Horse at the Library of Versailles?

V.H. As far as I know, never before, or at least not for the last ten years. It’s a project that the last three conservatives pursued one after the other. Marie-Françoise Rose had spoken to Sophie Danis, my predecessor, who in turn spoke to me. Therefore, I was able to make an old dream come true.

H.V. Although I am not a horseman (I practiced very little, not enough to consider myself one), I studied a lot through classical and historical literature the art of horsemanship and its challenges. Three years ago, I produced a great biography of Murat subtitled “la solitude du cavalier”, since that the character identifies a lot with the horse. Proposing this exhibition allowed me to deepen this research and also, the exchange with the people in charge of the Hermès’ heritage collections were excellent. I had never worked on a group project set as nice as this one.

What was the most difficult part of the exhibition preparation work?

V.H. The drastic selection of what we wanted to present. The Hermès collection has thousands of objects. We had to cut the list little by little until we were left with only “Art and Power” which allowed us to present 30 exceptional pieces that belonged to State agencies or to families of sovereigns.

How was it different from other projects you handle with the Library of Versailles?

V.H. In fact, due to the variety of its collections, the Versailles library is very eclectic when choosing exhibits. The project was well received, especially by the collaboration established and by the announcement that was made a few weeks before during the Paris Olympic Games equestrian events would be held at Versailles.

Where does the collaboration with the Hermès collection come from?

V.H. The idea comes from Marie-Françoise Rose, who knows Philippe Dumas very well and who Since 2000 he had in mind to carry out something related to the horse. I’m very happy to be able to give continuity to this idea and I hope to continue working on other projects with the Hermès heritage center.

What was the impact? Press, public?

V.H. We had almost 3,000 visitors, which is a few and a lot at the same time, but the event remained linked to Versailles. The audience that traveled was primarily motivated by their relationship with the world of the horse. As for the press, it was mainly the specialized press that was interested in the event.

V.H. Knowing that it was my first exhibition at Versailles, yes!

What is your personal relationship with the horse? Horse rider? Historian?

V.H. I made a comment about this previously…. I think it’s a relationship of admiration but also of historical interest.

You talk about 2024 and the Olympics in your press archive… What do you aspire for that occasion?

V.H. Right now it is too early to think about what we can do in 2024, but without a doubt there will be something associated with the event.

V.H. Soon libraries will have new tools, particularly computer and digital, to continue reaching more audiences. We look forward to offering the texts and illustrations online, which will make up for the lack of a catalog.

What do you think of the World Horse Library project? What do you expect from this?

V.H. It is an excellent project to which I wish a long life and total success. If this library allows people who, like me, do not want to lose any reference for the preparation of an exhibition, a summary, a lecture, then it will have already reached its first objective.