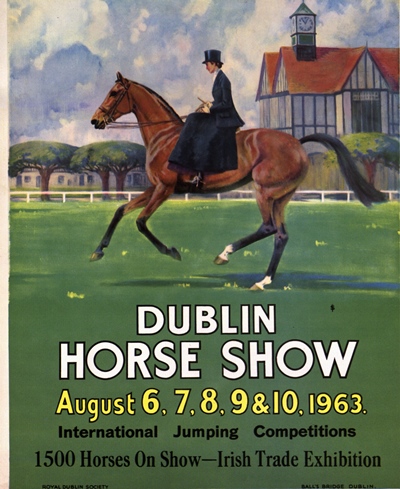 In Ireland you can immerse yourself in the catalog of the oldest horse show in the world.

Ireland extends for over 70,000 km2 and has just under 5 million inhabitants, grosso modo “weighs” ten times less than France (almost 640,000 km2 for 62 million inhabitants) … Except when it comes to horses: racing, game hunting, equestrian sports, breeding. Therefore, the “Green Erin” is no longer afraid of anyone. To review it, you just have to take a short visit to the library of the Royal Dublin Society (RDS), which since its founding in 1731 has been part of the Société Royale de Dublin (RDS) which is specifically dedicated to the philanthropic fields of the arts, agriculture, science, and industry. The library is located in the area of Ballsbridge, where every year since 1864, in the month of August, a great event, the oldest equestrian contest in the world has been held (the SHF organized its first event in 1866 at the Palais de l´Industrie in Paris). This library is open to researchers and members of the RDS.

The collection of nearly three hundred books on the horse contains works from the 18th century to today, on a variety of topics related to racing, game hunting, horsemanship, equine medicine and care, as well as stud-books on the origin of the thoroughbred, the “Irish draught” and other pony breeds, as well as sports and equestrian magazines and works.

The Dublin Horse Show is the part of the RDS library that contains documents related to contests from its creation to present day, and it is what it surely seeks the attention of the researcher working on the evolution of equestrian sport or simply of the modern horseman the most.

Those archives especially include the Maymes Ansell photo library, a collection of nearly 20,000 images taken during the Dublin Horse Show for over forty years (from 1967 to 2006) that the photographer donated in 2007. The archives of photographer Tony Parker complement this collection through the years 2005-2012.

Among other collaborators, who also enriched the collection by donating their photographs, newspaper clippings and correspondence, is the famous horsewoman and coach Iris Kellett (1926-2011) who formed dozens of champions in the 1960s/1970s such as Eddie Macken. The archives of the Royal Dublin Horse Show, through its annual programs and catalogs, clippings press, correspondence and internal documents, generally constitute one of the points forts from the library of the Royal Dublin Society.

RDS Library Collections and Dublin Horse Show Archives are available for online consultation or by appointment.