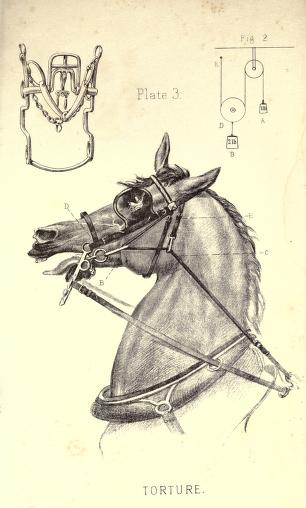 Englishman Edward Fordham Flower (1805-1883), pensioner of the brewery and great lover of horses, he took his pen to denounce the nefarious uses of the implements used in the carriages. The campaign was a real success as its brochure was published at least seven times in the course of ten years. The defense of animal welfare was echoed in the book Black Beauty by Anna Sewell published in 1877.

Flower denounces the torture produced by the effect of force multiplied by the set of pulleys of the reins, question the proper use of blinders so that the horse can see the objects on the road or shows the severity of the straight brakes.

Mennessier regrets that the author did not go further in his remarkably aesthetic demonstration and devastating for those who followed, adding: “I want to add that I have driven cars for 43 years, that I have never reined my horses, that I understood that their training consists to simplify things and that I always and without difficulty managed to get the pair of horses to carry the head at the same height. With my example I convinced more than one fan”.