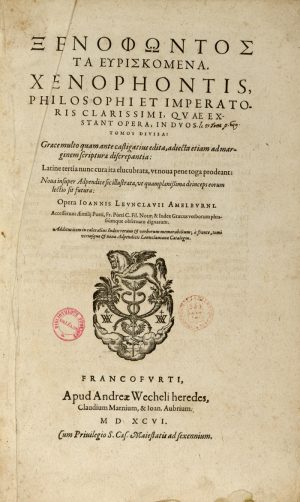 The World Horse Library (University-MRSH of Caen) will present on December 4 in Paris, a colloquium on the work of Xenophon, studied and commented on by Alexandre Blaineau at based on the work he published with Actes Sud in 2011: Xénophon, L’integrale de l’œuvre équestre.

Xenophon (almost 428 – almost 355 BC) is known for Les Helléniques, which relate the history of the Greek world during the first half of the fourth century BC, and also Les Mémorables, which speaks on the teachings of his former Master, Socrates.

But he is also considered the author of one of the first equestrian treatises in the world western De L’Art Equestre and a treatise on the command of the cavalry: L’hipparque.

The Athenian, a cavalry soldier of his State, toured the Persian Empire during the Expedition of the Ten Thousand – name given to the Greek mercenary soldiers recruited by Cyrus the Young to remove from the throne his older brother, King Aqueménida Artejerjes II. Too, having for a time renounced his hometown, he fought with the Spartans and in this way to Through his horseback riding he acquired an equestrian experience that he transmitted in writing for the didactic.

Therefore, De l’Art équestre, is considered of such a modernity that it deserves that the current horsemen know him.

In order to transmit knowledge, The World Horse Library wants to disseminate with the broadest possible scope of the entire colloquium aimed especially at university students, historians, researchers, students and journalists, in Paris.

The World Horse Library, a project directed by the MRSH CNRS University of Caen Normandy and the Normandy Region. The recording of the live discussion is guaranteed by Mojo Studio together with the MRSH – University of Caen and with the support of the Regional Equestrian Committee of l´Île de France (CREIF), of the French Federation of Equitation (FFE), Hermès.