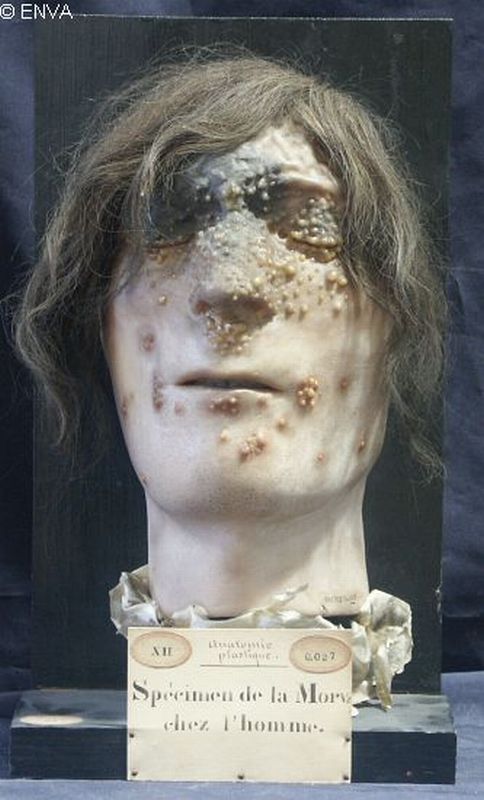 The photograph at the beginning of the article is the death mask of a veterinary student from Alfort, who died in 1836 after contracting glanders when he cut himself during an autopsy on a horse – Fragronard EnvA Museum.

Glanders was present until World War I and was the main contagious disease of the equine respiratory system. Once entrenched, it could trigger “farcin”, a terrible skin disease that resulted in death within eight to thirty days. Fortunately, it was eradicated during the 20th century and disappeared from our stables thanks to surveillance measures and the slaughter of infected animals, as well as border restrictions. Transmissible to humans, this disease was triggered by the ingestion of food or water contaminated by the bacterium Burkholderia mallei. In 1837, the Norman Pierre Rayer was the first to describe the effects of the disease in humans. But drastic hygienic measures only began to be taken when Pasteur’s work on microbiology appeared.

In the 18th and 19th centuries numerous treatises were written on the subject: Lafosse senior discovered its location in the nostrils. His son took up and completed his father’s theories in his Guide du Maréchal (1766).

During the 19th century, “non-contagion” theories were developed: the disease was supposed to develop only under certain conditions of weakness of the organism. This cost the lives of many men and horses.

Of course empirical remedies flourished. Mennessier criticizes one, which he gently mocks when he tells that a “certain Fabre of Marseilles, who for forty years had been buying the stinking horses that were going to be slaughtered, took them to his infirmary and after a few days with much astonishment (with reason, it is seen that this Fabre came from Marseilles) one saw such a horse come out all spirited that had entered…rotten to the marrow. This empiric came to Paris, went to find General Dumas, who introduced him to General de Bressolles, and from there to the Duke of Montebello, aide-de-camp of the Emperor, who put at his disposal two bratty horses of the soldiers of the Guard. Assisted by M. Londin, veterinarian of the corps, Fabre began his treatment but the results seem much less conclusive than the author of the note wants to prove…”.