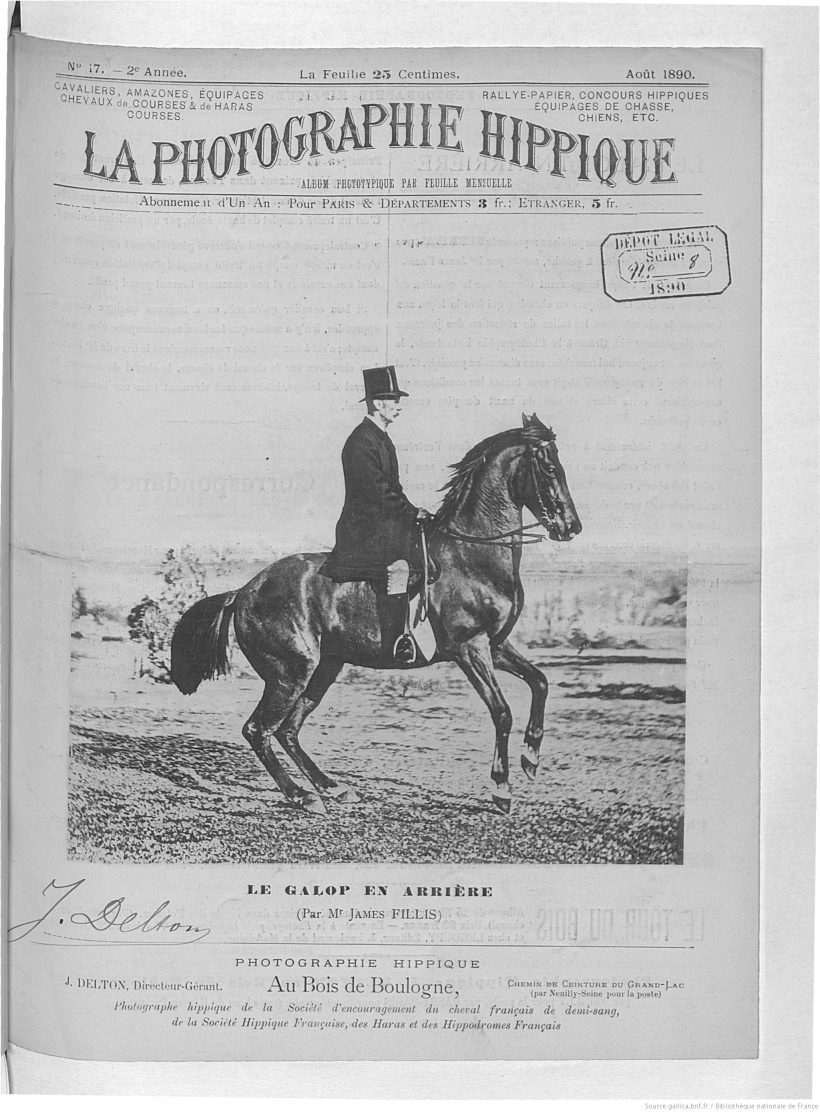 We know the famous photo of James Fillis galloping on his back, or that of Blanche Allarty as a horsewoman, doing a school jump. These images were immortalized by Delton.

Louis-Jean Delton Sr., a former cavalry officer, was a pioneer of equestrian photography. Thanks to him, the golden age of 19th century equestrian Paris was established, as he opened his Photographie Hippique (Equestrian Photography) studio at the Porte Dauphine, where the aristocracy and the gentry gathered, since 1860, to have their portraits taken on horseback or in their best carriage, among them: the Empress, the Prince Imperial, Ferdinand de Lesseps, McMaho, the Princess of Metternich, Ernest Meissonnier, the Radziwills, the Potockis.

The destruction of the premises during the siege of Paris did not prevent its reconstruction in the Forests of Bologna, in 1874, under the direction of Delton Jr. Since the movement of the horse was revealed through chronophotography, advances in instant photography prompted the Deltons to develop new methods of angle shots that would revolutionize the racing world. In June 1882, the Delton studio produced the first photograph of the finish of the Duke of Castries’ Little Duck in the Longchamp race.

Mennessier credits them with having “contributed to the illustration of the most important equestrian books published during the last thirty years: Barroil, Goubaux et Barrier, de Saint-Albin, Bonnal, Fillis, Howlett, Simonoff and Mœrder, Musany, Donatien Lévesque, Gallier, Duhousset, Liévin, Comte de Robien, Comte d’Havrincourt, Saint-Georges (Baron de Caters), Molier, General Faverot de Kerbrech, etc., as well as several periodicals, as well as that of several French and foreign periodicals. This business greatly supported the progress of the artistic representation of the horse. Through it we have been able to preserve the memory of great equestrian celebrities who have disappeared and of magnificent carriages that very soon the automobile turned into prehistory.”