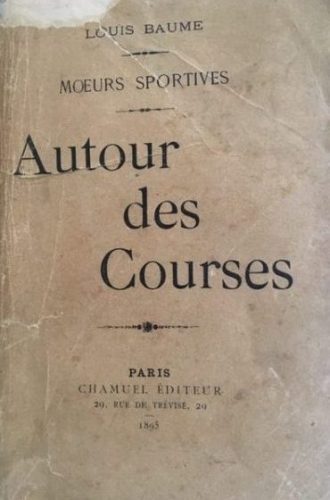 Like many other sectors, horse racing has also been affected by the pandemic caused by the Coronavirus. Racetracks have been closed and therefore both trot and gallop racing programs have been suspended, training centers have been reduced and stables have been confined until May 11, 2020. The main consequence is the cessation of betting on the races, managed by the PMU, which has caused difficulties in the equestrian press, one of whose banners, the Paris Turf, has taken the hit.

A well-lubricated machine that gets stuck. A machine that, since the creation of the jockey club in 1833 (flat) and the beginnings of Pari Mutuel Urbain (PMU) as we know it today (the law of June 2, 1891 enshrines the mutualisation of bets conceived by Jérôme Oller ending the arbitrariness of bookies as it still prevails in Britain), it hasn’t evolved much in nearly two centuries, except perhaps on one level: the honesty of the races and the moral principles around it.

This is what we learn by reading Louis Baume’s book, published in 1895, entitled Autour des Courses and subtitled Mœurs sportives. Yes, maybe there – which makes us happy – horse races would be “cleaner” and the business that makes them live, that of betting!

In six chapters, the author, who makes a “portrait” of the racing world at the end of the 19th century, dedicates two long chapters to the “middle”. The first (book III) is entitled “Fraud” and the second (book V) “Morality in the races.” And in each of them, Louis Baume tries to get to the bottom of things and failures. Descriptive, Baume uses a sharp and lively pen in certain passages, to the point that we can deduce that this passionate rider was free to write what he thought, probably without belonging to circles concerned about the future of the horse (political, economic, social ) of the time. The second book written by Louis Baume, Influence des Courses au trot sur la production chevaline en France, is less critical, but shows a true knowledge of the subject, a passion for the know-how of the provinces and the concern that they are treated equally the same with Paris. There is nothing new under the sun. This study, written for the Société des Agriculteurs de France, was awarded the “Prix Agronomique” of the Society and republished by it in 1913.