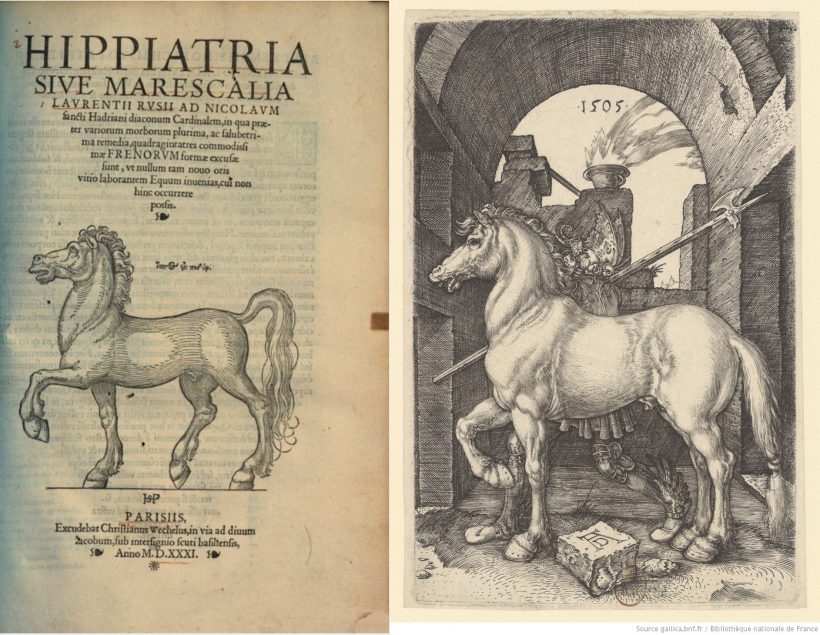 The summer of 1528 in Nuremberg was especially turbulent. The city was still in mourning for its great artist, Albrecht Dürer, who passed away in the spring. After his death, a little master engraver named Hans Sebald Beham published a ten-page booklet on the ideal proportions of the horse. The Nuremberg Council had it seized immediately, at the request of Dürer’s widow and Willibald Pirckeimer, a lawyer and important figure in the city. Beham, who had already been convicted in 1525 for questioning Lutheran dogma after the Reform, had no choice but to flee Nuremberg to avoid another arrest. It is known that Dürer was preparing a Book of the painter, which he never published, and in which he wanted to deal with human measurements, those of the horse, those of architecture and, finally, perspectives with light and shadow. Joachim Camerarius, a great lover of horses and friend of Dürer (he had translated his Treatise on the Proportions of the Human Body into Latin), related that, during his trip to Venice between 1505 and 1507, his research was stolen from the master engraver on the ideal size of the horse, inspired by Leonardo da Vinci‘s studies for the Monument to the Sforza, whose line is found in The Little Horse (1505) (ill., top, right).

The original attribution of the drawings by Dises buchlein zeyget an und lernet ein masz oder provided der Ross remains uncertain. Was Beham inspired by the work of Dürer, whom he had met, or was he his student? Did you knowingly use the stolen research, as charged? The mystery of this plagiarism remains.